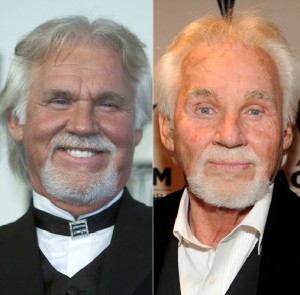 STATEN ISLAND, NEW YORK – Kenny Rogers made a name for himself in country music with songs like “The Gambler” and “Elvira.” He was a fixture in Nashville with a voice and face everyone could easily recognize. That was until he revealed the results of a botched plastic surgery that left him looking just as shocked as his onlookers.

Kenny claims that a very well-known and highly sought surgeon performed his makeover.

If so, how did he end up looking like this?

Well, it appears that there were some misjudgments and distasteful preferences on the surgeon’s part that when combined, resulted in Kenny’s alien-like transformation.

For one, Kenny’s brows have been raised to an unnatural angle and height.

“A brow lift rarely needs to be more than minor and almost always at a lateral angle,” says Dr. Andrew Miller, a Staten Island facelift specialist. “This yields the most flattering brow position and prevents the ‘shocked’ expression seen on Mr. Rogers.”

Second, and probably the most to blame, was the surgeon’s preference to alter the angle of the eye. “He had this thing where he thought the outside corner of the eye had to be higher than a certain point,” says Kenny. “I regret that.”

It also appears that Kenny’s surgeon performed blepharoplasty on the star.

Blepharoplasty is a surgery performed on the upper or lower eyelid to remove excess skin.

The problem with combining multiple eye procedures is that each one affects the results of the other.

“If the patient appears to have excess skin around their eyes, you have to be very careful to determine exactly what is causing the excess in the first place,” says Dr. Miller who also performs Botox and nose job procedures.

If the patient’s brow could benefit from higher elevation, raising the brow to its proper position could alleviate the excess skin problem on its own. In such a case, if the surgeon “predicted” the brow lift wouldn’t be enough to reduce the excess skin and added blepharoplasty, the patient’s eyelid skin would be left so tight they would be unable to close their eyes.

“As a surgeon, it’s essential that you have the intuition to predict the results of a procedure and make judgments accordingly,” says Dr. Miller.

Whether Kenny’s surgeon’s mistake was in the combination of procedures or the intensity at which each was performed is hard to say. However, the more experienced a surgeon is at performing a particular procedure the better the results. This is why we often stress the importance of seeking a facial or body specialist. Surgery is serious and the results are lasting – this can be a good thing or a bad thing depending on your results.

If you have any questions or concerns, call today and schedule a free consultation with a top Staten Island plastic surgeon.